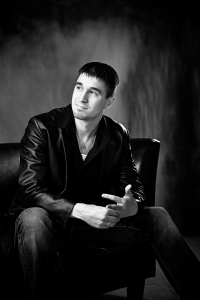 Michael graduated from the University of Wisconsin Green Bay May 2009, and completed a second certification from UWGB December 2010. In his first time through college he was member of the Phoenix Swim and Dive team. As his swimming career finished he threw himself into the ballroom dancing world.

His dancing journey began at the UWGB Ballroom Dancing club. Soon after he found that competitive ballroom dance filled the hole that swimming created and is now his passion.  Michael holds State American Smooth titles dancing in scholarship competitions at the Wisconsin State DanceSport Championships. However the greatest part of Ballroom dancing for him, is the communication and partnership between dancers.

As a volunteer intern, Michael helps dancers ages 6 through 60 at DancesSport of Green Bay and loves teaching. Since he graduated from UWGB with a Bachelors of the Arts and social studies teaching license Mike substitute teaches around Green Bay and is the Head coach of the Green Bay United High School Boys swim team. Michael’s focus whether in ballroom, the classroom, or coaching is to impact students in dramatic and positive ways.

Michael is honored and excited to be returning to this year’s Dancing With The Stars with Jackie and Amyee. He knows they will both have memorable and show stopping dances.

Describe your first dancing recollection. About how old were you and what was the occasion?  My first performance happened my junior year at the diversity fair at UWGB. I trained with a group of Latin American Students and American kids and performed in from of a huge room filled with people. It was quite an experience I look back at the video now and laugh at the memory.

Who is your dream dance partner?  Julian Hough

Who is your favorite dancer of all time on ABC’s Dancing with  the Stars  and why?  Derrik Hough, it is hard for me to admit, but I am cursed. I see the beautiful women stars dancing, but I do not watch them. I watch the male professionals, and I feel Derrik does the best job at expressing each song and showing off his partners.

Why support the Red Cross with your participation? I recently had my tonsils removed. I thought I had insurance, found out after the surgery that I did not. A charity organization at the hospital covered 100% of the bills that I would never have been able to pay. I am blessed that with Dancing with the Stars I have a chance to give back.